Contributed by Jeremy Wright, Posted 11/1/22: Researchers at the New York State Museum and SUNY-ESF have recently published a journal article that demonstrates the existence of at least two species of living Bowfin, which have been widely accepted to represent only a single, widespread species for over 125 years. Using genomic data in conjunction with several different phylogenetic and population genetic analyses, they were able to show that individuals from upstate New York and the Great Lakes represent Amia ocellicauda (first described in 1836) rather than the widely recognized A. calva. Though geographic gaps in sampling prevented a full evaluation of living Bowfin diversity and the ranges of those species, these results are suggestive that much remains to be found. The full article is available at: https://www.nature.com/articles/s41598-022-20875-4. 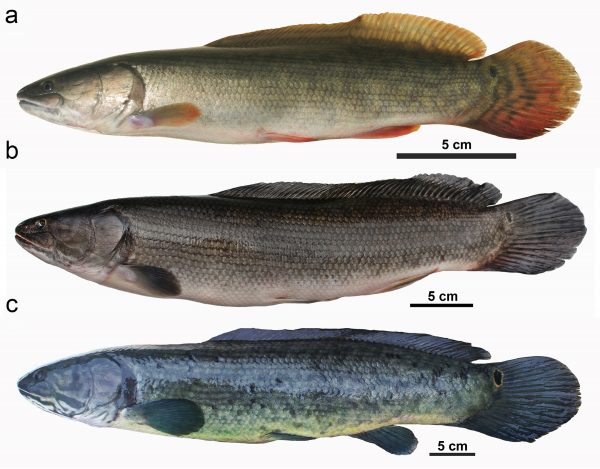 Coloration differences between Bowfin species: A and B are A. calva from South Carolina, C is A. ocellicauda from Georgian Bay, Lake Huron, ON