Contributed by Matthew Best, posted 8-3-20: Despite the best efforts by COVID-19 to foil all summer 2020 research plans, SUNY Oneonta MS Biology student and student member of New York Chapter AFS, Matthew Best, still managed to get out this summer to get hands on a few American Shad from the Delaware River as part of his master’s thesis work. His project is a multi-agency collaboration involving NYSDEC, PA Fish and Boat Commission, the Delaware River Basin Commission, and the US Fish and Wildlife Service. The purpose of this work is to improve our understanding of repeat spawning (iteroparity) and life-history traits of American shad in the Delaware River. The American shad is almost wholly semelparous in the southern extent of its range in Florida. They are thought to be increasingly iteroparous in Atlantic coastal rivers moving north, with the Delaware River near the geographic center of their range. Numerous changes to the system during the past century, including stocking from other populations and remediation of a legacy of pollution in the lower Delaware River have resulted in what appear to be a mix of life-history strategies in this system, along with what is likely a high degree of natural variability in life-history by virtue of its location. Matt and his advisor, Dan Stich, undertook initial collections this summer as part of a two-year pilot study to help characterize this variability. This work took them from the famed shad fishing waters of Port Jervis upstream into the East Branch of the Delaware River in Hancock, which is better known for trout fishing. Early in the season, they observed shad actively spawning by the hundreds near Port Jervis in small groups of up to 15 individuals as they moved upstream around 6 p.m. – a sight neither had witnessed before, and one they’ll never forget! As the season continued, they observed spawning throughout the upper river, too, catching most of their fish later at night while progressing up-river with the migration. Sampling around high-use recreational areas and anglers seeking COVID-relief in the popular trout waters of the upper river proved challenging. On the bright side, it would be the first time the two biologists were able to conduct field work during the day for weeks. So, they set aside their nets and electrofishing boats, and attempted to catch them the old-fashioned way on shad darts. This afforded an up-close opportunity to watch the spectacle of shad migrating through shallow waters toward their ultimate, but unknown endpoint as they moved upstream by the hundreds all around the avid anglers for days. The shad would sometimes come to rest in the wake of the anglers’ legs before trudging on again upstream. One in any twenty might have paused to consider the allure of a pink shad dart before feigning left and dodging right on their way to spawn. It was at once some of the most frustrating and exciting work of the season. Rods in hand, they watched the pods move right past them as they presented beautiful dart after dart. But most shad proceeded single-mindedly, ever onward until the blue sheen on their silvery backs faded into the next upstream riffle beyond reach. While talking with anglers and residents of the river, most were surprised and some even refused to believe the fish were there so late, but after a month straight with a skeleton field crew the team was acutely aware. The waning two-person crew watched on as shad moved upstream at Lordville Bridge through July 4th weekend, and by the next weekend it was like the shoals of migrating fish were never there. Waiting with bated breath and baited lines, the pair of newly enamored fish-heads are passing the days until next season in the lab trying to tease apart what they have seen, now with data. 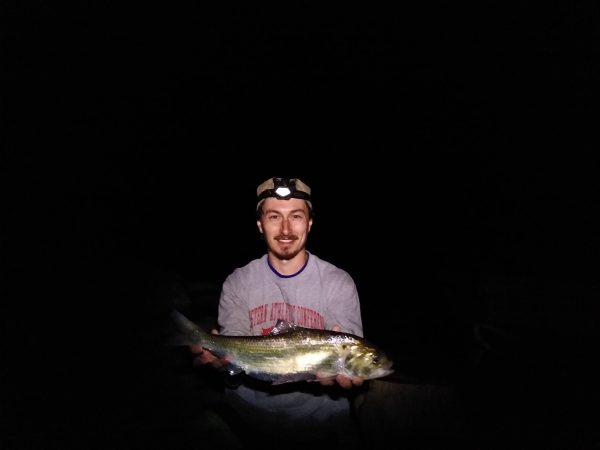 SUNY Oneonta MS Biology Student Matthew (Matt) Best displays one of about 150 American shad collected from the upper Delaware River this summer as part of his master’s research. Matt is studying various aspects of their life-history, including growth and migration history, and population genetics.