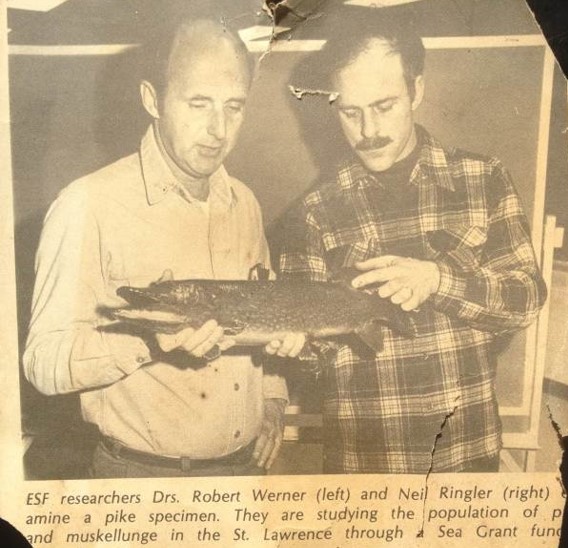 New York AFS lost one of its own on September 13, 2020. Dr. Robert G. Werner (Bob) passed after a 6-month battle with cancer.
Bob served as NYAFS President in 1976 and was an active and long-standing supporter and contributor to AFS, the New York Chapter and the Northeast Division. He was born in Indiana and served in the US Marine Corps, stationed in California and went on to complete his PhD at Indiana University under Dr. Shelby Gerking. Bob was a recognized larval fish ecologist and aquatic ecologist and became a professor at the SUNY College of Environmental Science and Forestry in 1966, he spent 1969-1970 at Cornell, then returned to ESF and taught Limnology and Ichthyology until his retirement in 1999. He also taught Tropical Ecology on the island of Dominica and had sabatticals at the Scottish Marine Biological Laboratory, with the National Marine Fisheries Service, SE Fisheries Research Laboratory in Beaufort, NC and as a Fulbright Fellow Special Program for the Improvement and Development of Ecological Research in Argentina.  He was a founding member of the AFS Early Life History Section and served as its 7th president after making numerous and significant contributions on its editorial board. He was an Associate Editor of the Journal of Freshwater Ecology and Transactions of the American Fisheries Society. Bob served on numerous boards and committees and received the AFS Professional Achievement Award. He was a co-founder of the Great Lakes Research Consortium.
He was best known for his seminal work on larval bluegill, but also muskellunge, pike, sturgeon and numerous other species and topics in fish ecology, limnology and aquatic ecology. He conducted research on fishes of the St. Lawrence River beginning in the 1970s and worked on numerous other studies in New York State and beyond. This work with his graduate students and agency professionals at DEC led to the eventual development of a long-term research program on the St. Lawrence and the Thousand Islands Biological Station at ESF after his retirement. In 1980, he published Freshwater Fishes of New York State: A Field Guide that provided a widely used guide to students and professionals. He loved to fish, x-county ski, run (for years he ran 8 miles daily and completed a few marathons), travel, and spend time with his family. Bob was known for his collegiality and was an inspiration for his professionalism and how to manage a well-balanced career.
After retirement in 1999, he moved to Skaneateles Lake and continued to work. For the the Skaneateles Lake Association, he led invasive species response efforts, helping with attempts to eradicate eurasian milfoil on the SLA board for many years in efforts to protect the lake.  He received the Skaneateles Citizen of the year award in 2014 for his distinguished service. He published two more books, one as co-editor Fishery Science: The Unique Contributions of Early Life Stages and also Fishes of the Northeastern United States . His professional legacy continues to this day through the numerous students he mentored and institutions he worked with and believed strongly in. He is survived by his loving wife Jo and their son Kurt and daughter Kitty and grandchildren (https://obits.syracuse.com/obituaries/syracuse/obituary.aspx?n=robert-werner&pid=196818487&fhid=11719).
To honor Bob, the Robert G. Werner Scholarship is being developed to support a student to work at the Thousand Islands Biological Station (https://www.esf.edu/wernerfund).