Contributed by Scott Wells, posted 9-4-20: Sixteen staff from New York’s DEC, OPRHP, and Capital-Mohawk PRISM offices represented the ‘upper river’ at the annual Fish Count held on Friday Aug 14. Along with four DEC volunteers, everyone was involved in either collecting and/or displaying river fishes at this growing event. Sampling effort included five shocking runs in three of the four lower branches (i.e., tailwaters) of the Mohawk River near the confluence of the Hudson in Waterford, NY. Two hours of boat electrofishing resulted in 29 species and 293 individual fish collected. Most of the adult fishes were then processed and held in live cages for public display the following day. No seining was conducted during the event due to lack of public participation. 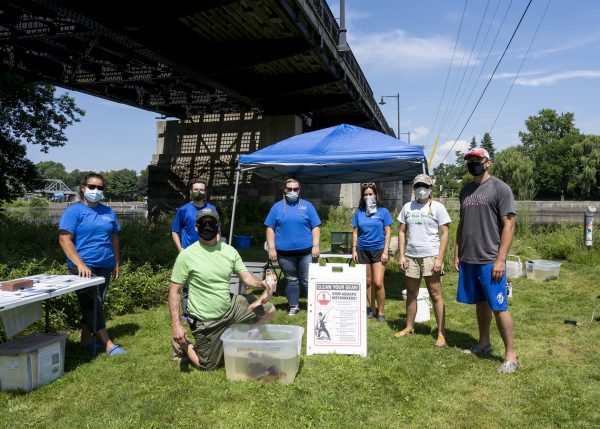 Smallmouth bass, channel catfish, and spottail shiner were the most common species collected with catch rates of 26, 11, and 9%, respectively. American eel and white perch were also common with catch rates of 6.5 and 5.5%, but all other species were <5%. Only one specimen was collected for six of the species in the fish count. No large schools of forage fishes or young of year river herring were observed, though some were present during all runs. High fish richness in the tailwaters is largely due to the heterogeneity of aquatic habitats available to both resident and migratory fishes despite being hydraulically connected to the ‘eat-no-fish’ section (i.e, PCB contamination) of the upper Hudson.

Our usual set up included tables, aquaria, small and large plastic tubs to hold river fishes of various species, ages, and sizes. Numerous aeration pumps were successful in reducing mortality. As expected, we did not get any large groups come to our display areas though a handful of youth came with their parent(s), who after a few short minutes – became interested and all enjoyed playing with the specimens. Attendance was moderate at 47 for both sites and DEC staff from Albany’s Office of Communication Services were on-site to film a short live segment of our event setup. See DEC’s Facebook page: https://www.facebook.com/NYSDEC/videos/3040288662719254/

Annual public outreach events like the HR fish count provide a great venue to generate interest in this dynamic watershed and function like a public workshop for river ecology and fish identification. Kudos to all our hard-working staff and volunteers for another successful event despite the social limitations.